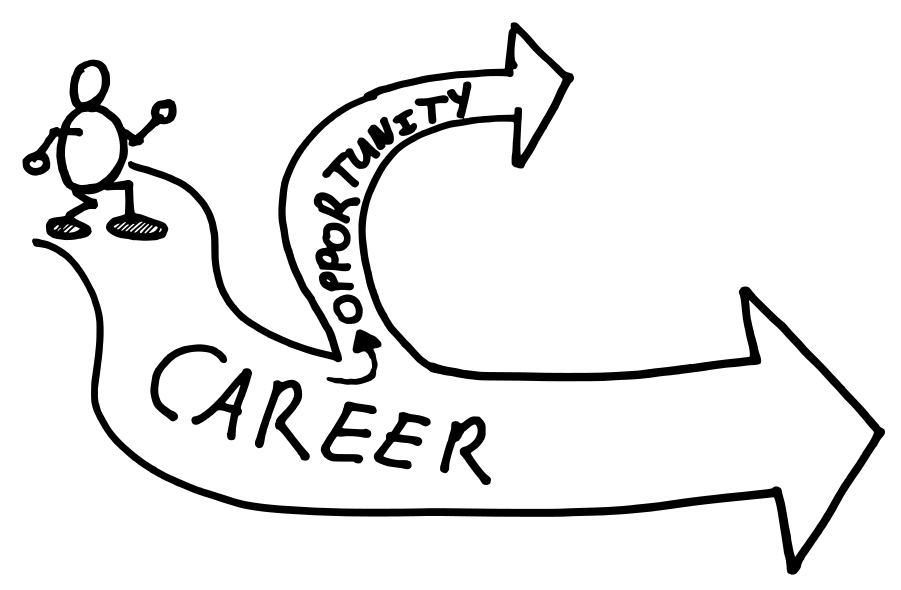 For the last few weeks I have been pondering over this month's topic of the Ministry of Testing blogging club (What’s the best career advice you’ve ever had?), and wondering if I can write something meaningful about that.
It was only after I went to bed one night and I couldn't immediately catch sleep, that it suddenly dawned on me the best advice I got was when I was still studying.
One lecturer (can't remember who) of my studies in The Netherlands gave this little piece of wisdom: grab the opportunity.
Looking back at my career so far it has been the advice I have followed and lived by a lot; often more unknowingly than not...

As said, the advice to to grab the opportunity was given by a lecturer while I was studying at the HEAO in Breda. But I can't remember who. There was another tutor however, called Ferrie Veen, and I always enjoyed his lectures. Probably because of his approach to teaching, which I really liked.
One of the assignments he gave us was to compare yourself with an object and use that in a job application letter. I wrote a whole letter around a paperclip; the gist of it:

But more on that later...

The last part of the study was a student placement at a company for half a year, and work on a pre-defined practical assignment. That went quite successful for me and as a result I was offered a job at that company after my graduation. The first opportunity on my career path I grabbed. I landed a job without having to use my paperclip application letter, yet ...

Applying for my first job

Even before I started that job, the company went bust and I still had to go in search for a job. Looking back I could have seen it coming, but I was young and a bit naive (lesson learned).

Luck had it that, around the same time, a local bank where I lived was hiring for a role that matched my qualifications. I immediately grabbed the opportunity to go to that bank and asked for the manager who was hiring, so I could introduce myself. Of course I still had to write an official application, which I did. And yes, I did use the paperclip analogy. I did get the job and I worked there for 2 1/2 years.

After my then partner graduated, she got a job at a tourist office, in a completely different part of the country. This meant We had to move and I had to look for a new job. Got rejected a few times on jobs I applied for locally, which was of course dissapointing.

A friend of my kept telling about his work and that they were always looking for colleagues to join their team. But that was a 2 hour commute one way. I still applied though and was offered a job. And by coincidence at the same time I got offered a job closer to home. After much deliberation I decided to take the offer further from home. Could have been interpreted as a stupid decision, but I never regretted it. In the 6 1/2 years I worked there I had many opportunities to:

After our first child was born, something had to change in my work situation. I was away still a lot for work. And as a result of that, I only saw my son during the week when he was asleep. Weighing the options, we decided to take the opportunity to settle ourselves abroad and start a Bed & Breakfast in Scotland. Something we often talked about. As financial support it was wise to still have a steady income, so I went in search for a job. I had the luck that a software company in Aberdeen was hiring for a role that suited me perfectly. I applied, had a telephone interview, flew out for a face to face interview, and soon after an offer was made. I willingly accepted, and so we packed our stuff and moved across the pond.

In that company, I started as the first tester in a team of 12 developers. Over the years, I built up a structured testing discipline and culture. In the 12 years at that company I've grabbed many opportunities to grow mysself. By the time I left that company, a team of 15 test engineers was in place which I was in charge of.

Regarding my B&B adventures, I can tell many a story about that. But I will leave that for another day.

It was not my plan to leave the company yet, as there still were so much more opportunities to be grabbed. But beacause of a organisational restructure I was made redundant.

I knew there weren't many job opportunities close by. So I had to look further afield for my next gig, and needed to be aware that it probably would take a bit longer to be back in fulltine work. Then, a week into me sitting at home, a friend pointed out that a local whisky distillery was looking for a tour guide. Well, that was an opportunity I couldn't let pass. I showed my interest and soon I was showing tourists around Scotland's most beautiful distillery, while I still kept applying for jobs.

Luckily it didn't take too long to be made a new offer for a job. But it meant I was working away from home again ...

Have been in my current job for almost 3 years now, and it already has given me lots of new opportunities:

In your career, there are many things coming on your path you can't foresee, and not always have influence on. You can steer your career a lot yourself, but sometimes you need to look for opportunities, grab them, and help that get you further.

lets see what's the next opportunity ...